One of the new releases this weekend brings us another horror movie in space with an alien creature involved, Life!  I’d made sure to prepare myself for the carnage of multiple astronauts as they fight this extraterrestrial beast.  But did the movie pave way for another twist on the genre?  Or would the film be as generic as it’s title?  The following review will be spoiler free.

Life is directed by Daniel Espinosa and stars a solid cast led by Jake Gyllenhaal, Rebecca Ferguson, and Ryan Reynolds.

The film follows a group of astronauts at the International Space Station who receive soil samples from Mars.  Upon further study of the samples, one of the scientists discovers some bacteria within the dirt that he quickly reanimates.  Testing of the life form seems to be going well at first.  However, once the scientists are forced to prod the being, its intentions quickly become hostile, leading to serious calamity.

I was unsure how to feel about Life leading up to its release.  The trailers for the film certainly looked intriguing (albeit generic in feel) and showed off a great cast.  But something just doesn’t feel right about the film.  The title of the film does absolutely nothing to suck you into the movie or its premise.  If you asked a random person who hadn’t seen any of the promotional material for Life what the movie was about just based on the title, you’d get answers ranging from a romantic comedy about people moving through years of their lives to a movie about scientists discovering the meaning of life itself.  Such a plain title made me wonder if Sony had any faith that this movie would succeed.

However, what did make me a little excited for Life was the involvement of Paul Wernick and Rhett Reese in the writing of the film.  This is the duos’s first film since penning the script for Deadpool last year.  If you know anything about script writing, you’d know that Deadpool is an incredibly written film.  It musters every bit of entertainment value from what could be a very cliched film.  Life is a similar situation where we have a film that has a seemingly cliched space creature idea at its core.  Maybe, I reasoned, Wernick and Reese could apply some more magic to Life and make it a thoroughly entertaining film.

After viewing the film, I concluded that Life feels every bit as generic as I thought it might, but it’s still a well made film.

While each actor gives a solid performance in the role they are given, the main star of the film is the director, Daniel Espinosa.  As the film starts, you get a quick sense of how the film is going to feel and look as Espinosa pulls off an impressive long take that only the most skilled of directors can accomplish.  He has a great sense for the claustrophobic feel that a film like Life should have.  The music swirls at just the right time, giving you a sufficient amount of dread as the ever-evolving alien closes in on its prey. 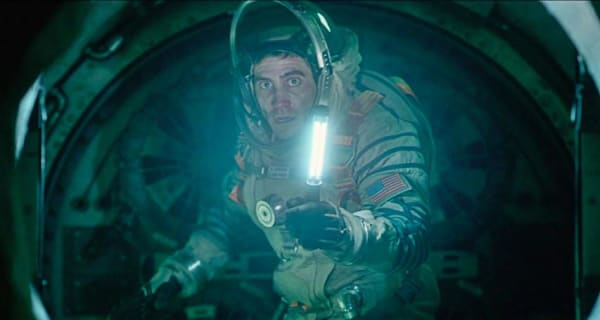 From a technical perspective, Life succeeds in practically every category.  Not only is the film beautifully directed, but the set design and visual effects are also very stunning.  There are few moments where an establishing shot or a view out the window that will take your breath away with it’s beauty (like any space movie should).  But the other CGI elements, most notably the alien, are really up to par.  The alien has a nice design that continues to grow and adapt throughout the film, becoming more sinister with every frame.

Moreover, the trailers didn’t show off much of the alien (to the point where they showed moments where the alien was involved without putting it in frame).   This smart use of marketing signifies that the technical team behind Life was working tirelessly to give the film a realistic feel.

The issues with Life are more with the creative side of the production, as the film does nothing to add a new wrinkle to the creature genre.  If you’ve seen the original Alien, then you basically know the plot of Life.  The one idea I appreciated was that the movie treats the alien as reluctant killer, in that it only acts hostile in order to survive once the astronauts attempt to provoke it.  This could have been a nice change-up from the typical extraterrestrial creature that tries to murder everything in sight from the beginning, but this idea is quickly thrown to the side for the typical killing spree.

Life also succumbs to the typical creature film cliches.  The alien conveniently disappears in order for the actors to have a heart-to-heart with each other.  This storytelling device drives me crazy as it sucks out the realistic nature of a bloodthirsty creature (which you would think would stop at nothing to feast on its prey).  It feels like an easy fix to capture the alien in some type of containment for a moment so that the actors can have a moment to catch their breath.  But Life doesn’t seem to concern itself with being thorough.

That being said, there’s enough in Life to make it a “fresh” film by Rotten Tomatoes standards.  It takes a completely average concept and elevates it with solid direction and acting to make it an entertaining film.  I see this film having legs on HBO once it leaves theaters.  It won’t wow you in any way. However, it’s too professionally made and sufficiently creepy at times to just cast aside.  The film does the job it set out to do.  Just don’t expect any extra bells and whistles.

Life as a whole, as mentioned above, is not original in feel despite not being based on any type of source material.  However, it has some genuinely creepy moments that make the film work.  It gets a B.  For those that buy into the conspiracy theory that the film is actually a secret origin story to Venom, you will be sadly disappointed.

image via The Telegraph

Thanks for reading!  Have you seen Life?  Comment down below to let your thoughts be heard.