Top 10 Movie OTPs We Can’t Help but Root For

For us non acronymized folk, OTP stands for One True Pairing (it could also mean One Time Pin, but I digress). In any movie, especially romance, so much depends on the chemistry between the leads. Sometimes it’s so good, we see them together on our screens again and again. If it ain’t broke, then don’t fix it, am I right?

Our OTP list begins with Keanu Reeves and Sandra Bullock. I think I speak for everyone when I say Speed 2 was a disaster because Reeves wasn’t in it. No one wants to watch a speeding boat unless it has both Reeves and Bullock on it. But I knew the chemistry was too good to miss out on, someone was bound to make a movie with the two of them in a romantic entanglement. 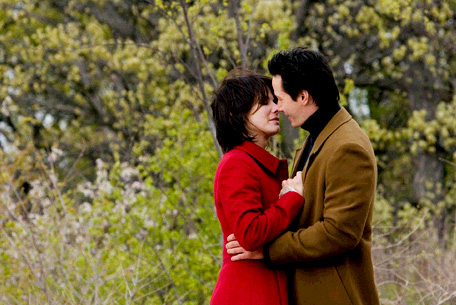 So we get The Lake House, and why, of all movies, did it have to be a movie where they are apart for most of it? Yeah sure they write letters and meet each other at certain points, but it’s not enough! Thank God we got an epic kiss at the end, winning them Best Kiss at the MTV Movie Awards, which Bullock refused to reenact with Reeves. Come on Sandy, I know you’re married, but you gotta give the people what they want. How can two people spend most of a movie apart, yet generate so much chemistry? I think for this pair, it stems from how affable the both of them are. I mean, Meg Ryan was the queen of romantic comedy for a while for good reason, and Tom Hanks could create chemistry with a postage stamp.

Image via Plugged in

I do like the change in tone from Sleepless in Seattle to You’ve Got Mail, from quiet romantic pining to a fun rivalry that blossoms into love. My absolute favourite part is when she said, “I hoped it was you.” I would also hope that my online pen pal is Tom Hanks; what a national treasure he is.

While everyone was gaga over Gosling and Stone’s chemistry and performances in La La Land (with good reason) they tend to overlook the goodness that is Crazy, Stupid, Love. The movie may have received mixed reviews, but the pairing of Gosling and Stone didn’t miss a mark. The scene in the bar where she charges up to him and kisses him, all the way until the Dirty Dancing reenactment, is both sexy and funny. And Stone is right, his abs definitely look photoshopped.

No OTP list would be complete without these two! Let’s face it, Runaway Bride happened mainly because we wanted to see Richard Gere and Julia Roberts on our screens again. In hindsight Pretty Woman might have a dodgy premise, but the pair of them just lit up my screen. Need I mention the piano scene or the one with both of them in the bathtub?

Of course there are the sweeter portions, where she teaches him to unwind and enjoy life more, which involves walking around on the grass barefoot. If only these are the kinds of problems I have to deal with.

Individually, Antonio Banderas and Catherine Zeta Jones are both very sexy people. It makes sense they become literal fire when they show up together on screen. I like that Zeta Jones’ character has encounters with Zorro both with and without the mask, and that he excites her either way. I think we all remember the dance scene that got us all hot under the collar, so hot it brought out the ire of a disapproving father. My face, on the other hand, is more like Anthony Hopkins’ in this scene.

Image via Time Out

The “Before Sunrise” trilogy is undoubtedly one of my favorite set of romantic movies. It is so centred in real life, and it also moves with time, allowing us to see Hawke and Delpy’s characters at different stages of their lives. From a youthful European trip to reconnecting 10 years later, to being married with children. With lesser actors this would not work, since most of what happens in the movies are the characters conversing with each other in the beautiful spaces of Europe.

Often times I feel a lot is communicated with just a shared look, which just oozes tension and possibility. This is especially so in the staircase scene from Before Sunset, where we get the beautiful shot of a winding staircase, and the both of them taking soft lingering glances at each other as they climbed. We all knew they were endgame at that point.

Adam Sandler and Drew Barrymore have to be an OTP because they have done three movies together, and all of them are romantic comedies! There is something so adorable about the pair of them, which I think brings an interesting contrast to the list. When we think of chemistry, we think sexy, so I like that these two offer something different. While Blended is not as well received as 50 First Dates and The Wedding Singer, I feel like they all deliver because of the humorous banter between the two.

If you identify as a human, you have probably seen Titanic. Leo as Jack Dawson is boyishly charming, and Kate is a classic beauty. I mean, who doesn’t love a Romeo and Juliet type story? From the dancing scenes, to him painting her “wearing only this”, leading to the signature hand slap against a steamy window. Their chemistry is so intense, it makes a ship sink. I am serious. A guy on the ship is literally distracted by them, leading to the iceberg collision.

I think we were all hoping for a reunion, which they took 10 years to give us. It is a different kind of chemistry for Revolutionary Road, more adult, tired, cynical, but still so compelling. Leo and Kate are probably the ones on this list that everyone is rooting for in real life, especially after her speech at The Golden Globes. Stop dating models Leo, your best friend is a much better option. They could be the ultimate, real life OTP.

I thought I would mix it up a little by including a Bollywood choice. To those of you who are unfamiliar with these names, a lot of us consider them to be the King and Queen of Bollywood. They have done numerous movies together, my favourite being Kuch Kuch Hota Hai (“Something … Something happens”) and Kahbi Khushi Kahbie Gham (“Sometimes there’s happiness, Sometimes there’s sorrow”). Plus they just have fantastic chemistry. Their friendly banter, which eases into flirting and slight teasing, turns into dancing that swirls with sensuality. There is a scene where he puts on bangles for her, and I know it’s just bangles but the way he grips her hand and slides the bangles over her wrist … it feels so scandalous! God, I need to calm down.

Technically, this addition is cheating, since the pair have only done one movie (Call Me by Your Name) together, but I felt the chemistry is good enough to warrant an inclusion. Also, Luca Guadagnino, the director of the film, has said that he is seriously thinking about making a sequel to it, so I am not too far off base. If at this point of time, you still haven’t watched Call Me by Your Name, you should. It is a beautiful movie, so sensual and stirring, akin to the experience of eating dripping fruit.

I felt like such a voyeur watching their romance unfold because they are so authentic in their interactions, every touch and shared look felt so intimate. Hence, this is my plea to the Hollywood Gods: Please do not make us wait 10 years for a reunion — you’ve got to give the people what they want, am I right?

Thanks for reading!  Do you have any Movie OTPs you would like to suggest?  Comment down below!