Here we go again: another film set in  Conjuring Universe.  At the end of Annabelle: The Creation, viewers were teased about a solo film about the demonic entity known as Valek the Demonic Nun who first frightened audiences in The Conjuring 2. Now it’s finally here. And just like the previous Conjuring Spin-offs, it received less than stellar reviews. Most of the criticism was regarding its weak narrative and its use of tired jump-scares. Being the everlasting contrarian, the man who famously gave the Puppet Master reboot a rave review, perhaps I’ll have a different view about this film (spoiler alert: I don’t).

In 1952 Romania, a nun (Charlotte Hope) hangs herself as she’s being chased by a malevolent evil force. The Vatican sends Father Burke (Demian Bicher), a priest whose clerical history is filled with encounters of the occult, to research this ominous phenomenon. He is paired up with a clairvoyant novitiate Sister Irene (Taissa Farmiga), for reasons that Burke discovers later.

They reach out to Frenchy (Jonas Bloquet), a local peasant who found the hanging corpse to take them to the monastery. Once they get there, they realize they are dealing with a powerful evil that must be stopped and contained before it spreads and corrupts the world outside the monastery.

The Crooked Man was awesome though. Image via Bloodydisgusting

Let me be honest, I’m not a huge fan of the Conjuring films to begin with. I feel they lack bite and originality. The first two films are good films in themselves, but they feel very safe. All of them, including its two prequels, Annabelle and Annabelle: Creation, are PG-13. Any violence and obscenity you’d expect to encounter when dealing with demonic entities are neutered in order to gather up a larger audience. Let’s just say you won’t see anything as remotely shocking like the heretic antics of possessed Regan MacNeil.

I’m not saying these films necessarily need to be rated R, as there are plenty of competent horror films under the PG-13 marker, but the films also lack meaningful content. What I love about the first and third Exorcist films was that it wasn’t just about demonic possession. It wasn’t just a young teenage girl spouting obscenities or turning her head in a 180 degree angle. These were films filled with philosophical and theological questions regarding our place in this world. It was about the need of faith in the face of ultimate evil.

The Conjuring films and their spin-offs lack any interesting characters, philosophical questions or in my humble opinion, genuine scares — especially if you’re as conditioned as I am with jump scares. But the thing that bugs me the most about these films is the source on which these films are loosely based on: the works of Lorraine and her late husband Ed Warren. These so-called ‘’paranormal investigators’’ were nothing more than self-deluded charlatans, as is common in the paranormal investigative field. Promoting these films as being based on truth gives legitimacy to such frauds.

I know I should separate this fact from the movie itself. I know the whole ‘’based on a true story’’ claim should always be taken with a grain of salt but I deplore charlatans or anyone spreading lies about genuine scientific-methodology.

The great Abel Korzeniowski himself. Image via Culture.pl

For all the film’s flaws — and there are many — the always reliable Polish composer Abel Korzeniowski delivers another great score. Abel is certainly no stranger to the gothic horror genre — his score on the show Penny Dreadful is exceptionally beautiful — but his musical compositions to The Nun actually manages to give the film the foreboding atmosphere it so desperately needs.

The musical theme of the demonic Valek is especially effective, with its use of a droning monastic choir that slowly amps up as she makes her appearance. It’s such a shame that it’s for this movie, as this soundtrack would have been perfect to a subtle gothic horror movie.

The Visuals and Setting

Even though I was laughing at many of the supposed ‘scary’ scenes, there are some noteworthy creepy visuals in the movie. There’s one shot during the climax with a group of nuns standing still with sacks on their heads that was especially intriguing. Whenever Valek actually appears in the film — luckily she was used sparingly — it’s actually effective.

One shot in particular, with her slowly rising from the water, accompanied by the aforementioned Korzeniowski score, could have been a horror classic — but then the film itself should have been much better.

The film’s setting is also the most interesting aspect of the film. A monastery in the middle of nowhere is a perfect setting for a supernatural horror movie, and they’ve done a respectable job in its visual representation.

I’m sure photography geeks can pick up on the film’s lighting issues, such as how the monastery might be too well-lit for its own good, but I did like how dark most of the movie was and how important the little remnant of light, in the form of a burning for example, was during the film’s (supposed) suspenseful sequences.

Even though none of the performances are anything spectacular, each performer commits admirably to their roles. I’ve always been a fan of Demian Bicher. And though his character lacks the adequate intelligence of someone who has supposedly dealt with the supernatural before — more on that later — he does give the role some necessary gravitas.

Taissa Famiga, from American Horror Story fame, is mostly very likeable throughout the movie. At first I thought her character was supposed to be the younger version of Elizabeth Warren (Vera Famiga’s character) because she looked so much like her. I recently discovered Taissa is actually her real-life sister!

Even though Jonas Bloquet as Frenchy didn’t always work as comic relief — sometimes his jokey comments were a little groan-inducing — he’s the most likeable character of the film. Some of the humorous moments did make me laugh a lot, especially a visual gag involving him in a bar with a wooden cross by his side.

Bonnie Aarons is wonderfully ominous as the demon Valek. I recently discovered she was the one that scared the pans out of me in Mullholland Drive (as the bum behind the diner). Even though she didn’t manage to scare me as much as in this film, I do like her character in itself and wish she would return in a better movie rather than The Nun. 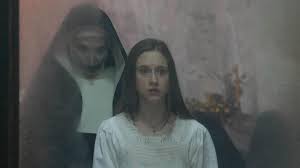 Behind you! Image via Baldmove.com

So let’s delve into the negatives, beginning with the film’s lack of grit. This can be seen mostly in the details. For example, Sister Irene, in her white monastic robe, always looks perfectly white, despite walking through the mud. The other nuns she encounters all look beautiful. The friendly comic relief of the film known as Frenchy, looks like a male model with his perfectly cut three-day beard.

The Romanian peasants we see occasionally in the film are dressed in the proper attire, but none of them look like they’ve worked the land. They look like actors that have been dressed up to look like peasants. Compare this for example to the masterful The Name of the Rose, where you actually feel like you’re in a monastery where people don’t have the luxury to shower themselves every day.

It all looks phony. Perhaps the film’s budget didn’t allow for these details, but compare The Nun to The Witch which probably had an even smaller budget yet had those gritty details — and was much scarier, never using a jump scare. It’s the details that matter in the film that could have made the setting more realistic and ultimately would have made the events more engaging.

Also I guess it doesn’t matter but all the peasants spoke perfect English. Come on! Let them speak Romanian. Not everyone is afraid of reading some subtitles.

Horror movies get a bad rep for having stupid characters. If you only watch one horror film a year, and it would be The Nun, you would inevitably get this impression. These are some of the most dense horror movie characters I’ve seen in a while.

Father Burke is supposed to be a veteran of paranormal affairs but you don’t get that impression in this film. He’s the most worthless exorcist I’ve ever seen in a film — even Father Morning (Nicol Williamson) in Exorcist 3, who failed miserably trying to exorcise the Gemini spirit in the film’s climax, manages to use his dying words for good.

The film is littered with scenes of people investigating in the dark, hearing some noise or seeing someone running in the distance and walking towards it. Each time they do this, they walk into a tired, predictable jump scare. Even after everything that happens, they still decide to split up a few times, which leads them to another Valek-induced jump scare.

There are many moronic highlights in the film, and though this does bring some laughs, it also becomes rather frustrating.

A Lack of Rules

In The Nun, the supernatural rules don’t matter. Sometimes Valek seems overly powerful, managing to kill someone in a whim, even managing to bury someone alive without the use of a shovel. Other times, she seems completely inept. She could have easily killed these characters anytime, especially since these characters are not particularly bright. But for some reason, she doesn’t.

The lack of consistency regarding her powers makes the final stakes of the film seem mute. Screenwriter Gary Dauberman was more interested in building interesting set-pieces than having any sort of logic to the film.

Despite a few creepy visuals, the film is simply never scary. Even the jump scares were tired. I could literally time them off each time they happened. The only fun for me was listening to how other people got startled.

Perhaps this is because I’ve seen too many crappy horror movies. For me, the atmosphere alone in Hereditary was much scarier than anything in this film.

The problem with prequels is that there is no suspense. In The Nun, they are trying to stop the evil from spreading outside the monastery, but since she pops up in The Conjuring 2, you know she’s going to escape anyway. Even though the actors are decent in their performances, their characters do such stupid things that I didn’t really care whether they lived or died. So the big question in the film seems to be: how does the nun escape the monastery?

My answer to this would be: who cares?

Well judging by the film’s boastful box office results, a lot of people did…

Hey, Has Anybody Seen Tales from the Crypt: Demon Knight?

The Nun could have also used more Billy Zane — but which film doesn’t?

As I unfortunately expected, The Nun is a cash-grab that completely squanders its atmospheric potential. Beyond the tired jump-scares, the film simply lacks genuine scares and suspense. The film has every tired trope of the horror genre, a script devoted to making characters do stupid things just so we can have a scary set-piece. The film’s plot lacks any foundational rules.

On a sidenote, there are some good visuals and the score by Abel Korzeniowski is exceptionally good. If you’re a fan of the Conjuring Universe, you don’t want to hear this, but as a genuine horror fan, I cannot in good conscience recommend this movie. Go see Tales from the Crypt: Demon Knight instead. 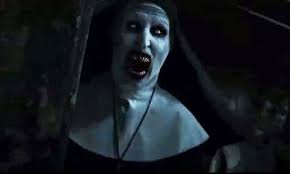 Thank you for reading! What are you thoughts on The Nun? Comment down below!