‘Twilight’ is the Glittery Vampiric Offering We Can’t Shake Off

Twilight is the movie we all love to hate on. We hate on Bella, we loathe the portrayal of vampires and let’s just face it, the movie isn’t that well done either. We hate it so much — we can’t stop talking about it. Twilight references still make their way into movies, it inevitably comes up when people talk about Fifty Shades (Fifty Shades was originally Twilight fan fiction) and just this year alone, MovieBabble has already churned out two posts on Twilight (here and here). This will be our third post.

We might not want to admit it, but Twilight has made its way into our cultural consciousness. It has changed the way we look at vampires, werewolves (though they are apparently shapeshifters) and also, in a way, helped lay the path a little for more female-led narratives to make their way into the movies. Granted, Bella Swan isn’t exactly the champion we were hoping to get, but I do think a lot of her good qualities are downplayed and overlooked because of the sheer stupidity she sometimes demonstrates. She is immensely loyal and faithful, as we saw in the months of pining that is New Moon, as well as brave. I certainly would not have been able to give birth to a vampire baby. I am going to try something new here, which is actually try to be complimentary about Twilight. Let’s see how far I go.

It has become fashionable to speak disparagingly about the books. I mean, yes, it is no Harry Potter, and Stephanie Meyer is no J.K Rowling, but damn I loved those books (except the last one, that one can just burn in hell). I started reading the series because my grandmother got me the second book for my birthday. She didn’t know it was even a series. She had merely asked the salesperson if she had anything to recommend for a teenage girl. The salesperson suggested New Moon, mainly because it had been a frequently snapped up item. So she got it for me.

At that point I had never heard of it, and it languished on my shelf until I was bored one night and decided to take a crack at it. This is the thing: I couldn’t stop reading. It shames me to admit this, but there were parts that I found to be utterly beautiful. This is my favorite quote from the book: “Before you, Bella, my life was like a moonless night. Very dark, but there were stars, points of light and reason … And then you shot across my sky like a meteor. Suddenly everything was on fire; there was brilliancy, there was beauty. When you were gone, when the meteor had fallen over the horizon, everything went black. Nothing had changed, but my eyes were blinded by the light. I couldn’t see the stars anymore. And there was no more reason, for anything.” I mean, come on! You have to be made of stone if you are unmoved by this.

My rapid consumption of New Moon led me to seek out the series, and because of the series I found the movies. The most intense joy a book-reader could ever feel is when they find out that the books they have read is moving to a cinematic world. Because once you are done with the series, it is over. You can read it again, but that original magic of dipping into it for the first time can never be regained. Books becoming movies is the only way we can experience the world for the first time again.

I think I must watched Twilight about a dozen times when it first came out 10 years ago, saving every little visual of the movie into my imagined world of the book. I must sound like some kind of lunatic, but I did the same for Harry Potter, The Hunger Games, One Day, Gone Girl etc. The sad thing about being a Lit major is that in some way you recognize you will always prefer the fantastical, intangible world of the book to your regular, mediocre existence.

Some of you naysayers might not be aware that Robert Pattinson actually sang some of the songs on the soundtrack for Twilight, and they are actually good. My favorite is “Never Think”, which was played during the last scene at the prom. Yes, he kind of mumbles the words a little, okay maybe a lot, but these songs have a strong sense of sentiment and emotional tenor vibrating through them. Here are the songs if you want to check them out.

Then there is Carter Burwell’s creation of “Bella’s Lullaby”, which is essentially a composition that Edward Cullen creates for Bella in the books. There is both sadness and a certain joyfulness to it, I don’t know how to describe it since I possess not the musical language, but that is how the song makes me feel. Don’t take my word for it, give it a listen and tell me what you think.

I would be remiss if I didn’t mention Muse’s presence in the soundtrack. Stephanie Meyer is a huge fan of the band and frequently talks about how their music was her literal muse while penning the books. The baseball scene that plays out to Muse’s “Supermassive Black Hole” was AMAZING. While the band is ambivalent about their music being on the soundtrack of films such as Twilight, they do recognize that it is important to put music out there in different ways, to reach people that might not have heard about them before.

Lastly, I cannot end this without bringing about Paramore’s “Decode”, which is the main song on the soundtrack. I like that there is such variety in the music on the soundtrack, from softer melodic beats to harder rock sounds.

For all the movie’s flaws, the soundtrack was certainly not one of them. 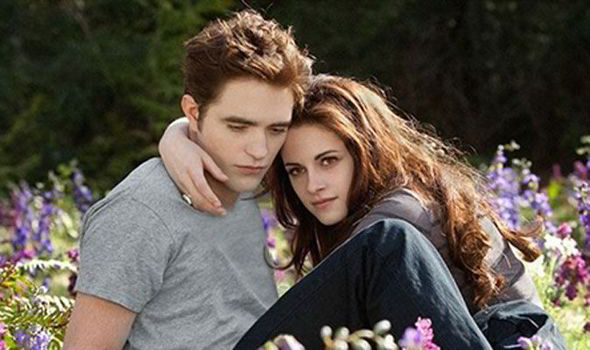 As much as we have criticized Stewart and Pattinson’s acting, we must admit that they have good chemistry with each other. After all, their on-screen romance became an off-screen romance, so some of that chemistry must have sizzled into real life. They also won the MTV award for Best Kiss 3 times, from 2009-2011 (I am ashamed that I know this). Sometimes the scenes come across as cringe-worthy, mainly due to the writing in my opinion. During the scene of their first kiss, Edward suddenly appears in her room and says that he breaks in sometimes because he likes to watch her sleep. It is supposed to be sweet, but comes across as invasive and stalkerish. But the kiss itself is well-played, with a good amount of tension since Edward is wondering if he can control himself (because he is a vampire, not man stuff).

I like that the romance between Edward and Bella is so chaste and innocent in a way. With the over-sexualized portrayal of teenage lives gradually taking over our cinema, it is nice to see foreplay and anticipation.

The rest of the cast actually do a good job of reflecting their book counterparts, both in terms of looks and temperament. The main problem of the movie is the pacing and framing of certain scenes, which sometimes makes the acting look awkward. Like the climatic scene at the end where Bella gets bitten. The vampires are very calm in contrast to Bella who is thrashing about on the floor. All this is statically presented to us, making it difficult for me to feel a sense of urgency and consider the possibility that she might die. I mean, I know she won’t because there are three other books, but at least sell it to me. Hardwicke wasn’t as skillful with these action scenes as she was with the romantic ones.

The prom scene at the end is beautifully lit with fairy lights, where Edward bears the weight of a hobbled Bella and they dance together. The camera pans with him as he dips her and moves with erotic slowness to kiss her neck. The music, the acting, it is all so spot on. Stewart communicates Bella’s anxieties about being with someone like Edward, because while she ages, he will stay the way he is forever. You see, to her, he is this beautiful, otherworldly creature, and she sees herself as unworthy in contrast. Edward, on the other hand, views her humanity as something beautiful, and he wants to preserve that for as long as possible. They are both desperate to be what they feel the other needs.

Some would say that Bella and Edward are being idealistic and in some way delusional, since they speak here of sharing their lives with each other forever, having only spent a few months together. I would say, going through a life-threatening situation together and besting it bodes well for any relationship. I am sure we can all remember our experience of first love, where we felt a kind of immortality in the love we had, even though realistically we know it might not last. It is a world where a “lion [can fall] in love with [a] lamb”, and there is a bravery in that, I suppose.

Thanks for reading!  What are your thoughts on Twilight?  Comment down below!