Top 5 Characters that Should Be Official Disney Princesses

No Mulan was hurt in the making of this piece.

Surprisingly enough I have a lot to say a lot when it comes to this topic. Ralph Breaks the Internet just came out this past Thanksgiving, a film where the famous Disney Princesses made their first collective appearance, and it so happens to be the thing to push me over the edge. I’ve had numerous grievances when it came to Disney’s selected roster and they seemed to have confirmed it all with this movie, showing no signs of changing.

For those unaware, the official Disney Princesses line-up consists of Snow White, Cinderella, Aurora, Ariel, Belle, Jasmine, Pocahontas, Mulan, Tiana, Rapunzel, Merida, Anna, Elsa, and Moana. This list aims to course correct the wrongs of the Big Mouse. In no particular order, I bring you the Disney Princesses that weren’t but should be!

If Tiana and the underperformance of Princess and the Frog are any indications, box-office shouldn’t play a factor. Kida is an amazing character, an actual princess with an emotional backstory that ties itself to the mythological city known as Atlantis. Atlantis: Lost Empire does feel like a forgotten movie along with the rest of Disney’s 2000s era, but that shouldn’t mean its finest should get the boot.

Her appearance stands out from the rest. The white hair beautifully compliments the darker skin complexion and tattoos. Now that I think about it, what if Disney rejected her because of the tattoos? Does that explain why Moana doesn’t have any? I hope not because Kida is truly an amazing princess who is both brave and complex. Ariel and she would be good besties.

Here comes the slew of detractors. I remember most of the straight-to-DVD animated sequels fondly, if not better than a lot of the originals. You can call me out all you want in the comments, I can take it. This won’t stop me from proudly calling Melody one of the coolest princesses.

If we can have Anna and Elsa, two sisters sharing the spotlight, then I see no issue with giving the same treatment to Melody. Plus, wouldn’t it be awesome to see a mother-daughter relationship featured in the Disney Princess merchandise? I think it would be amazing as Ariel’s parental presence would blossom on as well! Disney should embrace the fact one of their princesses is now a queen and a mother to show they too evolve as people. Including Melody hits two birds with one stone. 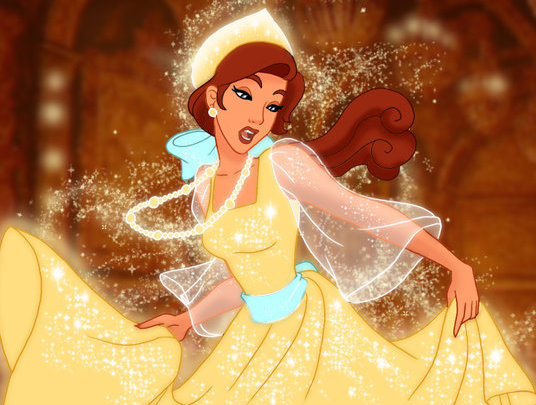 Who else found themselves in shock when they found out Anastasia wasn’t a Disney movie? I know I was. Part of it you can’t blame on me since the director Don Bluth helped out in the making of Disney classics such as Sleeping Beauty, Sword in the Stone, The Rescuers, Robin Hood, and more. Why did I include Anastasia then?

There were a lot of factors. She has her own princess song called Once Upon a December. Anastasia would be representing Russia, a country Disney has not given much attention to in any of their projects. The character shares a strong connection with the real-life version of Anastasia just as Mulan and Pocahontas did. Now, normally I wouldn’t have put a non-Disney character on this list. I’m fully aware which is why we can’t forget one single detail.

Disney bought Fox! That’s right Anastasia was distributed by 20th Century Fox which originally clashed with her chances. I along with many others will be more than happy to hear of this news. There was a friend of mine who refused to accept Anastasia wasn’t an official Disney Princess. Well, it seems it won’t be just the X-Men and the Fantastic Four getting a proper transition.

Bonus for being the third red-head princess and having a name that starts with an ‘A’.

Alright, I can see how all of the people would denounce Jane from ever finding a spot on this list, however, allow me to elaborate. My thought process behind all this is that Tarzan is now a king of the jungle, making her his rightful queen. On top of this, she has the charisma to add more flavor into the personalities of the Disney Princesses.

And if you think that’s all I have to offer, know I’m simply warming up.

Tarzan isn’t just a king of the jungle. What started off as fan speculation slowly started gaining credence. I’m of course talking about the theory that Anna and Elsa of Frozen have the same parents as Tarzan. In both films, their parental figures boat-crashed during a dangerous storm. It’s believed they found refuge on the uncharted island bringing us to the beginning of Tarzan.

I, of course, wouldn’t be talking about any of this if it didn’t have a higher significance. In 2015 the director of Frozen had this to say:

“Of course Anna and Elsa’s parents didn’t die. Yes, there was a shipwreck, but they were at sea a little bit longer than we think they were because the mother was pregnant, and she gave birth on the boat, to a little boy. They get shipwrecked, and somehow they really washed way far away from the Scandinavian waters, and they end up in the jungle. They end up building a tree house and a leopard kills them, so their baby boy is raised by gorillas. So in my little head, Anna and Elsa’s brother is Tarzan.”

There we go! Tarzan is also of royal blood making Jane perfectly worthy of the brand name. We’ve got the support of the director himself, he who made the film. Whether this was the initial intention or a change of mind at the sound of the fan conjectures, you can’t deny Jane’s double relevancy.

Originating from the Disney Junior TV series, Sofia earns the spot because she has met every single other official Disney Princess….I’m sorry, I can’t do this. I refuse to place this terror on the top of any list.

Somebody explain something to me. You have a female warrior and a wife of a demi-God. Which one of the two would you hand the Disney Princess title? My point exactly. Megara is the love interest of a demigod, the son of Zeus! Zeus who is the God of all Gods!!! How is it that Megara isn’t within the pantheon of the Disney Princesses? Heck, she deserves a Super Disney Princess honor. No one else shares any relations with a God, do they?

Sure, she’s not married to Hercules. Yet! But we all know that’s where the relationship was going. I also don’t remember Mulan marrying a prince (although came close to). No offense to Mulan, but if she can get into the club with no qualifications, then Meg should’ve been there day one.

With Megara specifically, you give Greece the country a spot in the group, not to mention with an extreme charisma as the face of it. She even has her own princess song which you can’t ever go wrong with. In my opinion, one of the best in all of Disney animation.

In case you’re wondering, I like Mulan, it’s just that all these five choices deserve a place on here more than her. They each have what it takes to find themselves on the official Disney Princess line-up. This is why Disney shouldn’t just open their doors for newcomers, but also selected veterans.

This list wouldn’t have been made if it weren’t for the fact that each of these ladies fit like a glove. I really wanted for each slot to actually be worthy of your time. Time to give the neglected a spotlight.

Thank you for reading! What are you thoughts on deserving Disney Princesses? Comment down below!