‘Shakespeare in Love’ is the Bard at his Finest

There must have been something in the waters in 1998, because it was the year that birthed so many good movies. Movies like Saving Private Ryan, The Thin Red Line, American History X, and of course, the movie that walked away with all the Oscars the following year: Shakespeare in Love. There was much contention on this decision by the Academy, especially because there were so many good movies to choose from. Kali, if you are reading this, I agree with your opinion on The Thin Red Line‘s cinematic attributes, but I have to strongly disagree with your assertion that Shakespeare in Love is a forgettable film.

Shakespeare in Love is the perfect blending of theater, poetry and film. The script is full of wit and humor, and the cast has splendid chemistry together. I have watched it many times before, due to my love for the theater and Shakespeare, and watched it again with my brother for this article. My brother, who certainly does not read Shakespeare for a living like I do, or even peruse it in his spare time, enjoyed it tremendously. That, my friends, is a testament to a well-made film — the fact that it is accessible to people who might not necessarily be Literature lovers. It deserved all the accolades it received, and these are the reasons why.

What is so genius about this screenplay is that it takes a known historical figure like Shakespeare, and adds a fictional layer to his life. The film explores the missing years in Shakespeare’s timeline, taking creative liberties since there is no tangible sense of what he was up to in those years. This allows them to create an imaginative space, using his play Romeo and Juliet as inspiration. It creatively considers possible events that Shakespeare might have encountered, which could have inspired the writing of Romeo and Juliet.

At the beginning of the film, Shakespeare (Joseph Fiennes) pledges his love to Rosaline, thinking she to be his muse to overcome his writer’s block. This is similar to Romeo’s pining for Rosaline at the start of Romeo and Juliet. This changes later on when Shakespeare realizes that Rosaline is not faithful, entertaining multiple men in her bed, which drives him to a state of dejection, wondering if he would ever meet someone who could inspire his pen. If writers are told to write what we know, then it would make sense that Shakespeare, in some way, lived through the experiences we encounter in his works.

Image via The Drunken Odyssey

A lot of these characters present in the world of the movie are actually people who lived during Shakespeare’s time. Christopher Marlowe (Rupert Everett) shows up a few times in the film, evoking within Shakespeare a sense of competition and rivalry. Most of us Literature buffs know that Marlowe was considered to be the greater genius of the two, and would have ended up the more enduring writer if his life hadn’t ended so prematurely in a bar fight. It is after his death that Shakespeare’s career as a playwright takes off more readily. There is also a young John Webster, who is portrayed to have a proclivity for violence and gore, similar to the subject matter of his books like The Duchness of Malfi. 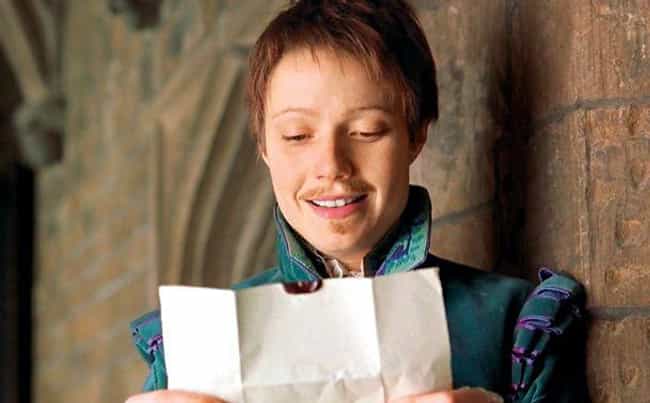 It is a known fact that in Shakespeare’s time, women were not allowed to perform on stage, so men would take on the parts assigned to women. Hence Viola (Gwyneth Paltrow), who has always wanted to be a player (actor), wears the guise of Thomas Kent in order to audition for Shakespeare’s new play. Shakespeare, hearing her speak his words so poetically and with such fervor, immediately wants her in the leading role of Romeo. Upon following her back to her residence, he sees Viola as herself, without the masculine guise, and falls for her. This once again mirrors Romeo and Juliet’s meeting at a party, and Romeo’s infatuation with her after. It creates an interesting dimension to their relationship, since he proclaims his love for Viola, yet does not recognize her when she dons the disguise of Thomas Kent. She rightfully calls him out on some of his claims, like his assertion that he would know her eyes anywhere because of how distinct they are, yet does not know that she is Thomas Kent.

Women dressing up as men is a common thing that shows up in quite a few of Shakespeare’s works. In his play Twelfth Night, Viola (the name is no coincidence) dresses up as a boy in order to work in Duke Orsino’s household, while in The Merchant of Venice, Portia dresses up a man so as to be able to have influence in court. There were limitations to what women could do, and the spaces they could occupy. Viola transforms herself into Thomas Kent to live out her fantasy of being a part of theater, and also as a way to escape her arranged marriage to the idiotic Lord Wessex (Colin Firth). This performance as a man allows her the freedom to go where she wants, like spend a rowdy night with the boys in a house of ill-repute. It also allows her to experience a passionate love with someone like Shakespeare. But this escape is temporary. She would eventually need to do her obligation and marry a man she does not love.

Such examination of gender roles by Shakespeare might have come about due to the ruling monarch at the time, Queen Elizabeth. She refused to marry, which was an extraordinary thing, since marriage was a social expectation for a woman. She recognized that her marrying someone would mean giving up her right to rule England, and handing the reins over to someone else. Yet she was aware of the vulnerability she possessed because of her gender, since her reign took place in a patriarchal society. The Queen is played marvelously by Judi Dench in this film, and, even though she was only on screen for a total of 8 minutes, took home the Academy Award for Best Supporting Actress.

Image via One Room with a View

Judi Dench was not the only stellar member on the cast, Gwyneth Paltrow also won an Academy Award (Best Actress) for her role as Viola De Lesseps. This is the third movie with Paltrow possessing a British accent, the other two being Sliding Doors and Emma. I am no expert so I cannot ascertain the authenticity of the accent, but I think she is definitely spot-on in her delivery of Shakespearean language. To do a Shakespearean play is no easy feat, especially when the film would be for a modern audience. Meter and tonal quality is so essential to the undertaking of Shakespeare’s words, and I think she did justice to the role.

While Joseph Fiennes did not take home any awards for his performance as William Shakespeare, he had the tremendous job of pulling everything together, and succeeded in doing so. He is sexy, he is passionate and it is remarkable how much he communicates just with his eyes (something he shares in common with his brother). This wouldn’t be a movie you would expect to find Ben Affleck in, yet there he is, and very convincing as player Ned Alleyn, whose character is kind of like the superstar in the company of actors.

After dazzling me in so many movies, it is jaw-droppingly hilarious to see Colin Firth play a buffoon. He is so good at it though, that I found myself rolling my eyes and laughing at his idiocy. Tom Wilkinson and Geoffrey Rush are wonderful to watch as usual, walking the balance between levity and seriousness with ease.

Shakespeare in the Classroom

The cast actually did an hour-long video about Shakespeare, which is meant to serve as a teaching tool in the classroom. There is no better way to induct young minds into the world of Shakespeare than by having famous actors speak about the Bard and his works. I always find it to be a plus point if a film can transcend its medium, in whatever fashion or form. This video is an immense educational resource, and the film is as well, with teachers able to use parts of it to teach Romeo and Juliet.

Even though Shakespeare was writing from a time so far from us, there is a remarkable contemporary quality to all his works. Romeo and Juliet explores the beauty and passion of young love, which can turn destructive without the proper environment to nurse it. His play Othello takes a look at an interracial marriage, and how social norms can infect and destroy the love that existed, becoming hate and jealousy instead. He had such an understanding of the workings of society, not just his own but ours as well, demonstrating that all the world is indeed a stage. The film asks of us an important question: can Art, theater, literature, film show us the truth and nature of love? The answer is a simple one.

Thank you for reading! What are your thoughts on Shakespeare in Love?  Comment down below!