Like any kid nowadays, I grew up in front of a television. This was no failure of my parents — it was really just the norm of the times (and still is). I also played outside like a maniac and entertained myself with various Hot Wheels cars. Yet, because I grew up in front of a screen, I’ve learned a lot from watching TV and movies.

I learned what MRI stood for (Magnetic Resonance Imaging) by watching the PBS show Fetch! with Ruff Ruffman. I learned the entire story of Moses by watching The Ten Commandments (1956) every Easter on ABC. Basically, I knew a lot of stupid trivia just from watching assorted movies and TV shows. Here are a few of the more inane things I’ve learned specifically from movies.

I first saw Stephen King’s The Green Mile edited on TV when I was a teenager, but Eduard Delacroix’s violent death was still quite a shock for me. Delacroix, a prisoner on death row, is executed by electric chair. Unfortunately, a prison guard maliciously fails to wet the sponge applied to a bald spot on the prisoner’s head, which conducts electricity through the body and kills quickly. Because the sponge is dry, the electricity causes his entire body to burn up in a painful, horrifying death. So, now I know that if I ever wish to execute someone to by electric chair, I must use a wet sponge. Very useful information to avoid terrifying images. 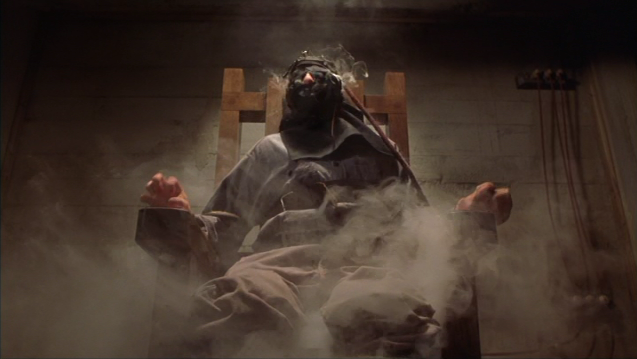 I’ve never watched a full rugby match nor have I ever participated in one. However, I do have a general grasp of the rules from watching Forever Strong. Though well-known in my more religious home state of Utah, wider audiences generally ignored it. Based on a true story, Forever Strong stars Sean Faris as Rick Penning, a delinquent rugby player who ends up playing for a local high school team after being detained in the juvenile detention center. Gary Cole, Sean Astin, and Neal McDonough also make appearances in this kitschy little movie. What I remember most is when Rick is teaching the other juvenile inmates how to play; he tells them that if someone “dies” (gets tackled or falls) play keeps going. Anyway, that’s a bit of useless knowledge Forever Strong taught me.

42 is a phenomenal movie that tells the story of Jackie Robinson, the first black Major League Baseball player. With stellar performances from Harrison Ford and Chadwick Boseman depicting the pain and the triumph of the journey, the movie is an instant sports classic.

There’s a scene in the movie when Jackie Robinson is on third base with a considerable lead-off. He eyes the pitcher cockily; the pitcher, obviously flustered, tries to intimidate Jackie back to his base, but only succeeds in making Jackie more cocky. In his fury, the pitcher drops the ball. The umpire calls this a “balk” and all players move up a base, meaning Jackie Robinson scores a run. There, now we’ve all learned something new about baseball (Or at least I did).

Stanley Kubrick’s famous Vietnam war flick is bloody, profane, and as violent as it should be. It uses every film trick in the book to convince you that war makes monsters out of men and good men die for no reason. As war movies go, Full Metal Jacket is definitely up there with Saving Private Ryan (1998) and Platoon (1986).

During the menacing scene when Pvt. Pyle (Vincent D’Onofrio) has gone off the ranch, I noticed something about the bathroom that Pyle and Pvt. Joker (Matthew Modine) found themselves in: there were no bathroom stalls. After about five minutes in internet research, I found out that the bathrooms in military boot camps usually don’t have stalls so recruits cannot hide anything. I realize that I should have paid attention to the drama on-screen, but I just couldn’t get past that there were no stall doors. Very uncomfortable.

Image via That Was a Bit Mental

Aside from learning the heartwarming lessons of family and the lengths we will go to protect our family, Finding Nemo taught me a very crucial fact that I know will protect me in the years to come: anemones protect clown fish. I say that this will come in handy because I am already a clown and it’s only a matter of time before I devolve and become a fish.

There’s not a lot that I don’t love about School of Rock: Jack Black, funny one-liners, and some awesome music. I love everything about the film (except Sarah Silverman) and I come back to it often.

While I learned a lot about rock music and bands in this film, for some reason the piece that always stuck with me was that the drummer of The White Stripes was a woman — Meg White. I didn’t really know a ton about rock music before this film (and I still don’t really), so this line came as a little surprise. It’s not exactly the most groundbreaking fact, but I did learn it from a movie. So, there you go — Meg White, the drummer of The White Stripes, is a woman.

Image via The Independent

Oliver Stone knows how to make political dramas and JFK is no exception. Starring Kevin Costner, we roll through the events of the infamous shooting, visiting and revisiting it repeatedly to try and find the truth.

While there are many theories posited and refuted throughout the film, one thing was made clear to me: Lee Harvey Oswald did not kill JFK; even if he did, he was put up to the task by someone with more authority than he had. It’s been a while since I’ve watched the film so I can’t remember what the film concluded — or if it really concluded anything — but one thing I know for sure is that the government is hiding something about JFK’s assassination and Kevin Costner will find out what it is.

Thanks for reading!  What dumb trivia have you learned from movies?  Comment down below!